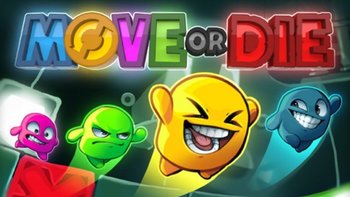 Move or Die is a fast-paced party game by Those Awesome Guys, released on January 21, 2016 on Steam, with PlayStation 4 version coming out on March 5, 2019.

", which instead was a singleplayer puzzle platformer. The original idea was to port it on Steam with additional competetive mode for 4 players, which was scrapped in favour of making the latter mode a standalone game.

The main gimmic of the game is the player's lifebar, which decreases when character stands still or is in mid-air, but regenerates whenever they move, hence the title of the game. The goal is to compete with 1 to 3 other players in variety of mini-games, known as "Game Modes". Later updates have introduced more Game Modes, Characters and Mutators, which change the way game can be played.

:"Now that the game is released, we will keep working on new - free - content updates adding more characters, game modes, levels and new ways to play! Because f*** paid DLC!"