No, I Am Behind You 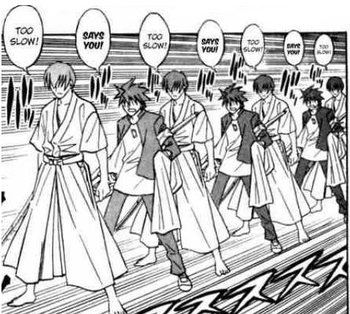 Alice suddenly appears behind Bob, and is ready to attack him. When he notices, she says "I am behind you!" Bob then performs a Flash Step, reversing their relative positions. "No, I Am Behind You."

A case of Rule of Cool most of the time, as it would logically require more time and effort to do this instead of just turning around and attacking your opponent.

A subtrope of Flash Step. Almost certain to cause a Snap to the Side or an Oh, Crap! expression. Not to be confused with Right Behind Me, which is about having someone surprised about who is right behind them in a non-combat situation.