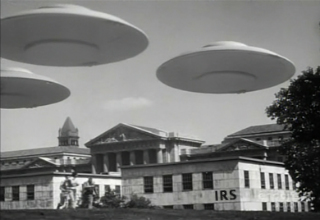 And There Was Much Rejoicing* Don't get your hopes up. Those saucers are being repossessed.
"This is insane! You can't possibly hold Washington, much less conquer the entire United States. I know. I've TRIED!"
— Cobra Commander to Serpentor, G.I. Joe
Advertisement:

So, you've got your villain, and his evil army. You've assured they're evil, but you're not sure whether the audience finds him threatening. Or, you're trying to reverse years of Villain Decay. One way or another, you need to give your baddie some serious villain cred. So what do you do?

It seems that every villain, whether they be Russkies with a grudge or a nutty supervillainess, has their crosshairs aimed firmly at the center of American political power. While this is often justified, just as often (or possibly more often) the villain has no reason to attack Washington more than any other city, and may often be setting his evil plan back a step by attempting to kill off the only people who can surrender to him.

A Sub-Trope of Invaded States of America, and sometimes Creator Provincialism. Related to Monumental Damage. See also the trope image for Dirty Communists. Contrast with Aliens in Cardiff.

In Real Life DC traffic is so bad that any invasion would be quickly stalled by the circles and roundabouts, which was their original intended purpose. Also note that no such fictional invasion ever took place under the term of Theodore Roosevelt. Coincidence? We think not!