Fanfic / The Conversion Bureau: The Other Side of the Spectrum 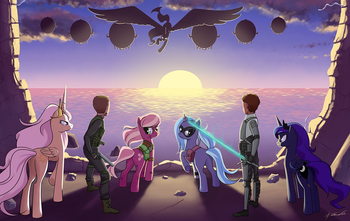 Foreground, from left to right: Princess Celestia, Col. Marcus Renee, TCB!Cheerilee, TCB!Trixie, Maj. Stephan Bauer, and Princess Luna. Background: Queen Celestia and her fleet of airships.
As is typical for the Spectrumverse, we celebrate the true meaning of My Little Pony: Friendship is Magic, Christmas and all that is good in the world against an apocalyptic backdrop of genocide, madness, infanticide, fanaticism and pop-cultural references.
It's a labour of love, after all.
— Co-Author VoxAdam, summing up the tone of the series
Advertisement:
Go here for tropes featured in the reboot.

The Conversion Bureau: The Other Side of the Spectrum

is a My Little Pony: Friendship Is Magic fanfic formerly co-authored by Redskin122004 and TB3, who stopped co-writing with Redskin after the release of the "Writes of Passage" chapter to continue his professional writing career. Since then it has evolved into a group project with authors Doctor Fluffy, ProudToBe, Drawdex, Kizuna Tallis, Beyond The Horizon, Bendy, ThatClosetBrony, Inquisitor-Awesome, Jed R, TheIdiot, Red-Bomber, VoxAdam, and Sledge115 pitching in, eventually drawing TB3 back to the story. It's based on The Conversion Bureau, with a different spin on the premise.

The story begins on a bright and sunny day in Ponyville, with Twilight Sparkle and her friends enjoying the beautiful weather and generally having a good break from their usual calamities and adventures. Suddenly, a magical portal appears, grabbing the Element Bearers' attention. When they go to investigate the scene, they find a bipedal creature that calls itself a "human", who can speak perfect Equestrian. But as they try to make contact, the human viciously attacks the Mane Six, all the while going on about something called "ponification".

Once the mess is cleared up, Twilight, her friends and the Princesses learn from the human, who is named Marcus, that his home world is being attacked...

By Queen Celestia and the Elements of Harmony themselves.

Upon realizing that there is a whole alternate universe of them committing these evil actions, the ponies of Equestria pledge to go to war to aid the last holdouts, human and pony alike, and save humanity from the dark Equestria's "solution" for them before it's too late. But they need to hurry – more than a third of the humans' world is uninhabitable thanks to The Barrier that's slowly wiping away every trace of humanity's existence, the assaults from the Solar Empire and their PER underlings wreak daily havoc on Earth, and over two billion humans have either died or been ponified into near-zombie-like Newfoals. The war grows more unforgiving by the day, and ever more hopeless...

Notable amongst Conversion Bureau fanfics for its massive cast, highly detailed world-building, and unusually high quotients of Nightmare Fuel, The Other Side of the Spectrum is possibly the most thorough and brutal of stories written in response to Chatoyance. You can find a timeline of the universe here,

along with another timeline page in the tabs above.

It used to have an official group, but disagreements between Redskin and the rest of the writers led to the group being deleted and the original fic is officially cancelled. The group has announced an official reboot called SPECTRUM

, aiming to fix most of the issues found in the original fic. The reboot's tropes can be found under SPECTRUM. It has an official group, which can be found here

Also comes with a variety of side-stories, which are unofficially considered to form several loose sequences and trilogies.

From the Early Days of War

Countdown to the Final Battle

It also has a crossover with The Avatar of Albion called Convergence!