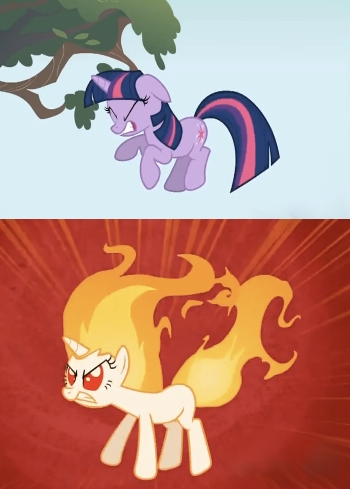 Congratulations! Your Twilight Sparkle has evolved into Rapidash!
Advertisement:

A common way of showing extreme anger for a character is to have them burst (whole or in part) into flames. This can either be a visual metaphor for anger, or played literally if they possess fire-manipulating abilities. Depending on the level of anger as well as the tone of the setting, it can range from merely steam coming out of their ears to a full blown volcanic eruption, and everything in between.

If the character has Pyrokinesis, Power Incontinence, and is Hot-Blooded, anything that causes anger is likely to manifest this way. If said character is evil, he/she will always be like this when angry. If the flames don't cause property damage they're probably a Faux Flame. It can also overlap with Fireball Eyeballs, Flaming Hair, and Wreathed in Flames — people who already have such features may have them flare up into larger, hotter flames.

Not to be confused with Angst Nuke, which is not just a visual metaphor, but actually dangerous.

Porky Pig gets so angry he bursts into flames, is reduced to ashes, then reforms out of a column of smoke.

Porky Pig gets so angry he bursts into flames, is reduced to ashes, then reforms out of a column of smoke.