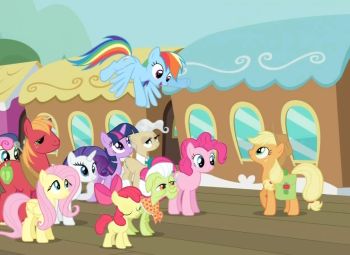 A rousing sendoff at the Ponyville train station.
Pinkie Pie: Speech! Speech!
Applejack: Oh, shucks. I'm not much for speeches.
Pinkie Pie: All right then, no speech! [runs off]
Applejack: ...but...
Pinkie Pie: [runs back]
Written by Amy Keating Rogers
Advertisement:

The episode begins as Applejack runs an obstacle course to practice for the upcoming Equestrian Rodeo in Canterlot. As she's won ten Ponyville rodeos in a row, everyone expects her to return with lots of blue ribbons (and tons of prize money to fix the damaged town hall; Derpy Hooves has outdone herself in the screwup department). After a flattering goodbye from all of Ponyville, AJ sets off for Canterlot.

A week later, everypony has gathered at Sweet Apple Acres to throw a surprise party for Applejack's return... but she doesn't show. A delivery pony arrives with a telegram from Applejack:

Twilight Sparkle: "Family and friends: Not coming back to Ponyville. Don't worry, will send money soon." ...that's all there is.

Stunned at Applejack's refusal to return, Twilight and the others declare they'll find Applejack and bring her back. They set off to search for their friend.

After a brief stop at the rodeo grounds, the ponies arrive in Dodge Junction, where they find Applejack has accepted a job at Cherry Jubilee's cherry orchard. AJ insists she just wanted a change of scenery, but her friends don't buy it and decide to stick around to try and get some answers.

The ponies fail to get anything out of Applejack at first, but when they weaponize Pinkie Pie's chatterbox nature, Applejack finally caves. She swears a Pinkie Promise to tell them everything the next morning at breakfast... but she never shows.

That's when the others discover that it is never a good idea to break a Pinkie Promise.

The ponies look for Applejack and find her trying to get out of Dodge (literally) via stagecoach! They give chase, accidentally losing Pinkie Pie and Rarity in the process. Applejack thinks she's safe when a Friendship Express Train passes and blocks her friends' pursuit, but Rainbow and Fluttershy fly over it and knock her over, revealing the real reason Applejack didn't return: She won ribbons in every event, but not one blue ribbon — and no prize money for the town hall repairs. Applejack was too ashamed to return empty-hoofed after everypony's build-up, so she took the job at Cherry Jubilee's so she could earn money to send home.

The friends all assure Applejack that it doesn't matter what color ribbons she won; having her home with them in Ponyville means more than any prize.

AJ, back on the Friendship Express Train home, narrates her letter to Princess Celestia:

"It's a tad easier to be proud when you come in first than it is when you finish further back, but there's no reason to hide when you don't do as well as you'd hoped. You can't run away from your problems. Better to run to your friends and family!

As they return to Ponyville, Applejack is greeted warmly by her friends and dogpiled by her family.

Meanwhile, Pinkie and Rarity are making their way back on a hoofcar after being knocked off the cart during the chase to catch Applejack. Pinkie is chattering incessantly, and Rarity is muttering dire implications for Rainbow Dash, who refused to go back for them.

Okay, first of all, WHAT KIND OF TRAIN DOESN'T HAVE A BATHROOM ON IT?!

Okay, first of all, WHAT KIND OF TRAIN DOESN'T HAVE A BATHROOM ON IT?!