Recap / My Little Pony: Friendship Is Magic S2 E10 "Secret of My Excess" 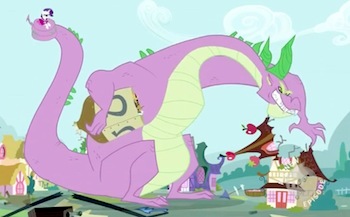 It's my birthday, and I wants it.
Spike: Hey there, Lickety Split! That's a pretty cool ball you got there! Did you know it's my birthday?
Written by M.A. Larson
Advertisement:

Lights dim around the library as Twilight Sparkle prepares for the highly arduous task of... re-shelving her books. Her concentration is broken, however, as Spike giggles in anticipation of eating a flawless fire ruby for his birthday dinner next week. When Rarity drops by, she spots the gem, and her admiration turns to distress when she learns he plans to eat the precious jewel. Sensing her discomfort, Spike graciously gives it to her instead, and earns a peck on the cheek.

A week later, it's time for Spike's birthday party, and Twilight uses the timely arrival of Pinkie Pie and the others to finally wash the kiss off his cheek. Spike, celebrating his first birthday in Ponyville, is astonished at the numerous gifts he receives:

Spike: I usually only get one gift for my birthday. From Twilight. A book.
(Twilight smiles sheepishly and then hides the gift-wrapped book she was carrying behind her back)
Advertisement:

Midway through the party, Spike goes to Sugarcube Corner to pick up a special sapphire cupcake Mr. and Mrs. Cake have made for him. As he's returning home, he crashes into Cheerilee, who gives him a hat when she hears that it's his birthday. Sensing an opportunity, Spike starts talking up everypony in town, mentioning his birthday and extorting presents from them. When Twilight catches him in the act, he stops briefly, only to resume once she leaves for home…

The next morning, Twilight is shocked to find Spike's bed covered with gifts — and that Spike is now a gangly adolescent as big as her! Not getting any answers from a pediatrician or a veterinarian, the two visit Zecora, who explains that his dragon nature is compelling him to hoard, which spurs his growth and drives him to even more avarice. Before the two can act, Spike steals everything from Zecora's hut and escapes! Twilight chases him back to town, where Spike's reverted to Hulk Speak and grabbing everything in sight. She tries to trap him in the library, but he breaks through the wall and rampages through Ponyville, snatching the apples and leaves from Applejack's farm, Fluttershy's chicken coop, the cakes from Sugarcube Corner, the Ponyville water tower, and finally Rarity!

Swatting away Rainbow Dash and Fluttershy (as well as the Wonderbolts), the now-massive Spike climbs the nearby mountain to find solace and a cave for his collection. As they ascend, Rarity (unaware that Spike is her captor) begins to tell him off; when he covets the fire ruby around her neck, Rarity contrasts his destructive greed with "Spikey-wikey," the kindest, sweetest, and most generous dragon ever. Reminded of his true nature, Spike instantly reverts to his original size, and the two suddenly plummet to the ground below. In freefall, Spike starts to confess his love for Rarity, only for her to gently silence him with a teary smile. The two are rescued by Fluttershy and Rainbow Dash at the last moment and deposited on the town's main bridge.

While the others celebrate, Spike looks shamefacedly over the swath of destruction in his wake. Near tears, he is surprised when Rarity tells him she's proud of him, and explains that he saved the town by overcoming his greed and remembering who he really is. Calling him her hero, she rewards him with another kiss on the cheek.

His spirits uplifted, Spike writes his own letter to Princess Celestia:

You might think that it would feel good to get lots and lots of stuff, but it doesn't feel nearly as good as giving something special to somepony you really care about. Well, I learned it is truly better to give than to receive, and that kindness and generosity are what lead to true friendship! And that's more valuable than anything in the world.