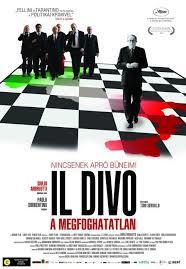 "Don Mario: Montanelli said: «De Gasperi and Andreotti went to mass together and everybody believed they were doing the same thing. but it was not so. in the church De Gaspari spoke with God, Andreotti instead with the priest. Giulio Andreotti: Priests vote. God does not."
"Beside Punic Wars, they accused me of everything happened in Italy. [...] but I never filed a lawsuit, for a simple reason, I have a sense of humor. There is another thing I have: a large archive, given I have not much use for fantasy, and everytime I speak about this archive, who must shut up, as if by magic, start to be silent." Giulio Andreotti"
Advertisement:

Il Divo (Italian for "the divine one", one of the many many many surnames of the man himself) is a 2008 biographical - drama movie about a meaningful period (1991-1993) in the life of Italian politician mastermind Giulio Andreotti, whose real life career spanned Italian postwar politics since the 40s well through the 90s. The movie is directed by academy award winner director Paolo Sorrentino and star Toni Servillo (unrecognizable) in the title role.The movie, with a sarcastic, darkly humorous tone narrates how Andreotti manipulates his party and the country during his tenure as a political leader thank to his impressive intelligence and network, and tried and failed to become President of the Republic in the 1992 election following the death of famous judge Giovanni Falcone by "cosa nostra" and his (supposed) Mafia involvement.The movie closes with his implication in a lengthy criminal prosecution for mafia association and a surreal sequence in which Andreotti monologues about the necessity of evil as a tool to defend the country and to maintain order, power and preserve the public good. Bear in mind that this movie was made while Andreotti himself was still alive! He died in 2013.

The movie has an amazing score ranging from classical music to techno. It was nominated for the make up achievement at the Academy Awards.

Tropes seen in Il Divo include: