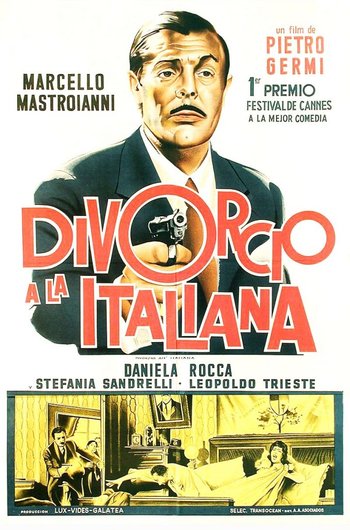 Divorce Italian Style (Divorzio all'italiana) is a 1961 Black Comedy by Italian filmmaker Pietro Germi. The film details impoverished Sicilian aristocrat Don Ferdinando "Fefè" Cefalù (Marcello Mastroianni) who lives in a ruin of a stately mansion with his large family that includes his father, a notorious gambler and womanizer; his saintly mother; his Old Maid sister (often joined by her boyfriend, who works as an undertaker); his loving and smothering wife, Rosalia. Also occupying the mansion (in fact a greater part of it) are Fefè's unpleasant Uncle Calogero (who actually owns the place thanks to bailing out Fefè;s father) and his family, the most important of whom from Fefè's perspective is Calogero's beautiful 16-year old daughter, Angela, who he’s infatuated with, and who he discovers returns his affections.

The film revolves around Ferdinando's plot to murder Rosalia, which will then enable him to marry Angela. He seeks to receive a slap-on-the-wrist for the crime, seizing on a provision of the Italian penal code of the time which allowed a "wronged" husband to receive a light sentence for killing his wife (and usually her lover as well) if he caught them "in the act". So, Fefè decides to set Rosalia up to have an affair, so that he can murder her and benefit from the code provision. Hilarity Ensues.