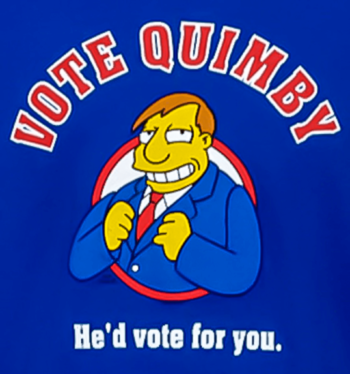 On the bright side, he is honest.
Politician, n. An eel in the fundamental mud upon which the superstructure of society is reared. When he wriggles he mistakes the agitation of his tail for the trembling of the edifice. As compared to the statesman, he suffers the disadvantage of being alive.
— Ambrose Bierce, The Devil's Dictionary
Advertisement:

A Sleazy Politician exemplifies the worst stereotypes of politics; they take bribes, engage in blatant hypocrisy, face constant personal scandals, and are generally unpleasant people to be around. Often, they are based on caricatures of real-world politicians, or amalgams of them — especially ones that fall into Acceptable Political Targets. They tend to be shown with almost no charisma, too, which tends to make you wonder how they got elected in the first place. When taken to extremes, they will often have No Party Given, though they can also be used as a Strawman Political against one specific party, ideology or against government in general. Compare the more outright and aggressively criminal Corrupt Politician. See also Mayor Pain (which frequently blends with this trope) and Obstructive Bureaucrat.