Literature / Brown Girl in the Ring 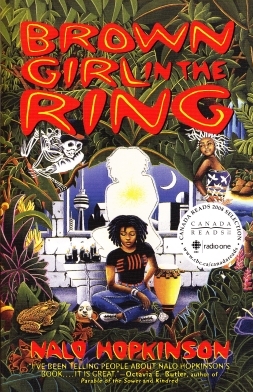 Brown Girl in the Ring is a 1999 novel by Nalo Hopkinson. Ti-Jeanne, a young mother, lives in what remains of Central Toronto after it was abandoned by the wealthy and powerful. Speaking of the wealthy and powerful, the premier of Canada needs a human heart to replace her own. She calls on Rudy, who is a powerful gangster who controls the flow of Buff to procure it for her. He deputizes Tony, Ti-Jeanne's baby father, to do the killing for the organ. Frightened, Tony calls on Ti-Jeanne and her grandmother Gros-Jeanne for help. And so Ti-Jeanne's journey begins.

It's set about more than twelve / thirteen years in the future of 1999, given lines and news that has not occurred at the time, like:

Large-scale chaos in the city core: the Riots
In the twelve years since the Riots, repeated efforts to reclaim and rebuild the core were failing

He'd cut headlines from newspapers that were twelve, thirteen years old
Ti-Jeanne had read the headlines: