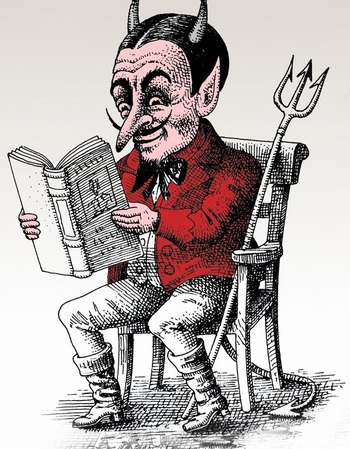 Dictionary, n. A malevolent literary device for cramping the growth of a language and making it hard and inelastic. This dictionary, however, is a most useful work.
Advertisement:

A hilarious collection of broken Aesops, Aesops with Unfortunate Implications, and spoof definitions by American satirist Ambrose Bierce. They originally ran a few a week in newspapers, under the title The Cynic's Word Book, but were eventually compiled into a book that's now free from copyright. Bierce had nothing but contempt for the mores and customs of his fellow man, and his book is full of ungentle Deconstruction of what people secretly mean when they speak.

A perennial favorite of atheists, cynics, denizens of Encyclopedia Dramatica, and good old-fashioned depressed people, it's considered by some to be a bona fide classic of American literature, although it isn't very well known in the mainstream and never achieved the notoriety of similar works, such as the writings of Edgar Allan Poe and H. P. Lovecraft. In a nutshell, The Devil's Dictionary is a dictionary that claims to present the "true" definitions of words, or rather the concepts said words supposedly represent, free of the superficial and hypocritical connotations they've gained throughout their years in the zeitgeist. As expected of Bitter Bierce, the vast majority of these paint even universally benevolent concepts (like "friendship") in a very grim light, often accompanied by poems or rhymes written by Bierce under a series of bizarre and cryptic aliases. Bierce had fierce hatred for mediocrity, common morality and religion, and his frequent jabs caused a great deal of controversy.

Many definitions came with quotes, real or fabricated, illustrating the folly usually accompanying the use of the word. He also frequently employed puns, some to truly awful effect. Some examples:

ACCORDION, n.
An instrument in harmony with the sentiments of an assassin.
ADMIRATION, n.
Our polite recognition of another's resemblance to ourselves.
COMPROMISE, n.
Such an adjustment of conflicting interests as gives each adversary the satisfaction of thinking he has got what he ought not to have, and is deprived of nothing except what was justly his due.
CONSERVATIVE, n.
A statesman who is enamored of existing evils, as distinguished from the Liberal, who wishes to replace them with others.
CORSAIR, n.
A politician of the seas.
CORPORATION, n.
An ingenious device for obtaining individual profit without individual responsibility.
Advertisement:
DEJEUNER, n.
The breakfast of an American who has been in Paris. Variously pronounced.
FOOL, n.
A person who pervades the domain of intellectual speculation and diffuses himself through the channels of moral activity. He is omnific, omniform, omnipercipient, omniscience, omnipotent. He it was who invented letters, printing, the railroad, the steamboat, the telegraph, the platitude and the circle of the sciences. He created patriotism and taught the nations war — founded theology, philosophy, law, medicine and Chicago. He established monarchical and republican government. He is from everlasting to everlasting — such as creation's dawn beheld he fooleth now. In the morning of time he sang upon primitive hills, and in the noonday of existence headed the procession of being. His grandmotherly hand was warmly tucked-in the set sun of civilization, and in the twilight he prepares Man's evening meal of milk-and-morality and turns down the covers of the universal grave. And after the rest of us shall have retired for the night of eternal oblivion he will sit up to write a history of human civilization.
HARANGUE, n.
A speech by an opponent, who is known as an harrangue-outang.
MONDAY, n.
In Christian countries, the day after the baseball game.
OCCIDENT, n.
The part of the world lying west (or east) of the Orient. It is largely inhabited by Christians, a powerful subtribe of the Hypocrites, whose principal industries are murder and cheating, which they are pleased to call "war" and "commerce." These, also, are the principal industries of the Orient.
PATRIOTISM, n.
Combustible rubbish ready to the torch of any one ambitious to illuminate his name.
In Dr. Johnson's famous dictionary patriotism is defined as the last resort of a scoundrel. With all due respect to an enlightened but inferior lexicographer I beg to submit that it is the first.
TWICE, adv.
Once too often.

According to its author, it is intended to be used as a school textbook. A copy can be found online here