"Better if Not Born" Plot 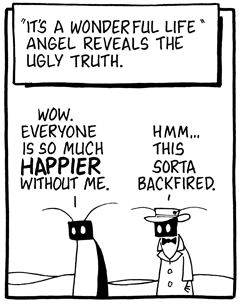 Seymour: Hey, this isn't right! You're supposed to show me how miserable everybody is without me!
Junior: Hey, if everyone made the world a better place, it'd be perfect!
— Little Shop
Advertisement:

Everyone and anyone has heard of (or have used) the It's a Wonderful Plot storyline: an angel shows a suicidal or otherwise depressed person how much radically different and worse their loved one's lives would be without them in it and it inspires a newfound sense of hope and confidence in them that allows them to turn over a new leaf or at least soldier on.

Then there's this trope.

The angel or another otherworldly creature shows the person, usually an Asshole Victim or other unlikable soul, that the world around them is doing just fine or is even better/beneficial without them in it. Obviously this does not bode well for the person and it can go two ways:

Sometimes, however, this could happen to one of the good guys or other sympathetic characters; they're shown that the lives of people would be better without them around. Perhaps they've been unintentionally annoying or even harmful to their surroundings. Perhaps they did some mistake in the past that changed the lives of people around them for the worse. Perhaps their parents didn't even mean to create them, in particular. Or (when Played for Laughs) perhaps they're just the Butt-Monkey whom everyone looks down on. They may either try to change themselves for the better, or atone for their mistakes, or attempt to kill themselves, or accept some kind of punishment, or at least leave the people's presence. If Time Travel is possible, they may want to kill their past self (causing them to die as well) or at least try to change them for the better.

Closely related to Necessary Fail and Suicide for Others' Happiness. See also Asshole Victim and And There Was Much Rejoicing. Compare Preferable Impersonator, where the character's friends and loved ones (if any) are better off with a fake version of the character.

As a Death Trope, this trope will have unmarked spoilers. Due to the nature of the trope, adding real-life examples would be asking for trouble/impossible.