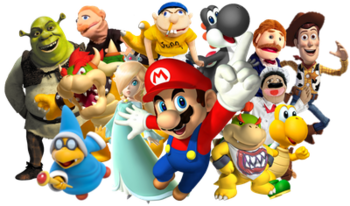 The plots mainly focus on a variety of Super Mario Bros. characters, some other unusual choices (such as Shrek and Woody), and various original puppet characters and the stupid antics they get themselves into. The plots are not typically episodic, although various episodes do have a running narrative. For the most part, the episodes either focus on Mario and how terrible his life is, Jeffy and the utter havoc he wreaks, or Bowser Junior and the trouble he and his friends can never seem to stay out of.

In February 2021, Nintendo filed a cease and desist order against Logan for the usage of Mario characters in his videos. Because of this, the Mario characters were replaced by the human puppets introduced in 2019, and the channel is simply known as SML now. On July 8, the original Super Mario Logan channel was officially deleted, along with 13 years worth of videos. Thankfully, many fans have put in the effort into archiving, and most videos have been reuploaded.

Chef Pee Pee wins the lottery and to celebrate, he tells Bowser, Toad & Junior what he really thinks of them.

Chef Pee Pee wins the lottery and to celebrate, he tells Bowser, Toad & Junior what he really thinks of them.