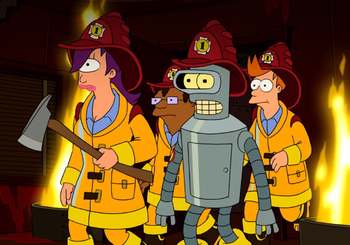 Maybe they want to make a difference. Maybe they need a new job. Or maybe they just really want to ride on that fire engine. Regardless of the reason, the main cast somehow get roped into firefighting.

Can be Played for Drama, but more often than not this trope is comedic and will be Played for Laughs, with the characters doing their usual goofy antics while trying to serve their community. This is especially true if the heroes (or especially the Ragtag Bunch of Misfits) are just honorary firemen, who serve no real function other than to hang out at the station until the get a chance to prove themselves. Often, Hilarity Ensues if they are the only ones available to respond to a call when the other firefighters are responding to another emergency or otherwise preoccupied. However, they can against all odds proof themselves surprisingly capable and actually solve the emergency, earning the respect of the other firefighters. If not, see Ignorant About Fire.

Sometimes you may even have children play at being firefighters. Usually the real Fire Department has to bail them out when they inevitably get in over their heads. This is especially true if the creators want to send a message to kids, and have some laughs in the process.

Expect the characters to go back to their originals lives when the episode is complete (especially in cartoons). However on rare occasions they may decide that this is what they want to do with their lives and stay.

Also while the name of this trope implies a series, it can be used in films, comics or other mediums, as long the main cast otherwise don't have much involvement with this activity.