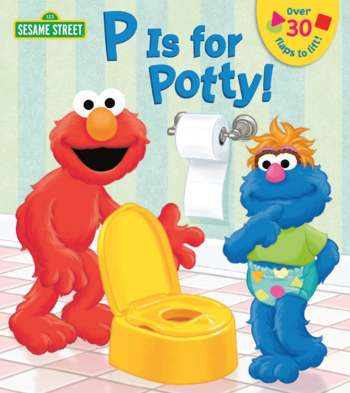 Make sure all the P gets in the potty.
Tommy: Everybody who's anybody is potty-trained.
Chuckie: Yup, and I'm an anybody now.
— Rugrats, the last two lines of the episode "Chuckie vs the Potty"
Advertisement:

This is basically a plot which revolves around a child character being toilet trained. There are two reasons the writers might want to play this trope: one is if they want to teach or encourage child viewers/readers/whatever to use the toilet, and the other is just to throw in some Toilet Humour.

The child being toilet trained will either be stubborn and want to stay in diapers forever or will be eager to learn to use the toilet and be a "big kid". They might start off not knowing what the toilet or potty chair is for and do silly things like wear their potty chair as a hat or flush a lot of stuff down the toilet. Expect a Potty Emergency to happen a lot in these types of episodes.

If it's made to encourage children to use the toilet, expect the toilet training process to be amped up as really cool and amazing, with parties for going to the toilet or characters getting all excited and the child being treated as very grown up. Also expect the line "Everyone goes potty, even X" with X being a certain group of people (adults, superheroes, firefighters etc.) and An Aesop about how Potty Failure is acceptable. In addition, the kid may get a Moniker As Enticement.

They will also often put emphasis, especially when it's supposed to be educational, on going to the bathroom immediately when you feel you have to, even when you are having fun, a common phrase for this process being "listening to one's body". This is probably due to the fact that real toddlers often put off going to the toilet if they don't want to but end up wetting their pants because they overestimate how long they can wait and have small bladders so they can't hold their pee as much as older people. However, they will often having a hard time describing what having to pee feels like (after all, it is pretty hard to describe), so they will often talk about "a feeling in your tummy" which sounds more like they're describing apprehension or nausea or even just a "funny feeling" which is too general.