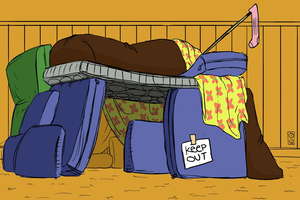 Sheldon: Okay, so the final four forts in the first annual best fort ever contest, or Fort-Off, are: Fort Knox, Fort Ticonderoga, Fort Sumter and Fort Cozy McBlanket.
Amy: I'd say, Knox over Ticonderoga, 'cause it's got the gold.
Sheldon: Mm-hmm.
Amy: And McBlanket over Sumter 'cause it has a higher thread count.
— The Big Bang Theory, "The Fortification Implementation"
Advertisement:

A classic childhood pastime for many is building a "blanket fort" or "pillow fort" out of pillows, couch cushions, blankets, and other bedding materials to make a sort of "clubhouse" or "secret hangout".

Fort building can be enjoyed by teens and adults, as well. Many parenting books even suggest that parents build one with their children as a bonding tool.

When an adult builds a fort in fiction, it's usually used to establish how young at heart or childish he is.