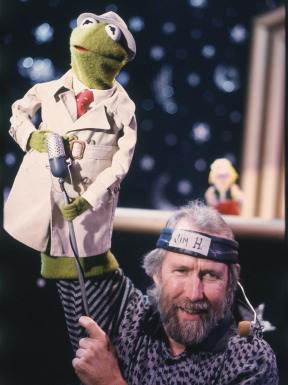 A character in a live-action series rendered by puppetry or animatronics. Usually used to create an alien or other non-human character.

Technically, "Muppet" is The Walt Disney Company's note previously The Jim Henson Company trademark name (a coined name, not a portmanteau of "marionette" and "puppet" as is commonly believed) for the unique brand of puppets created by Jim Henson. This usage generally occurs in such things as television shows and movies. Other production shops have adapted Henson's techniques, which have revolutionized puppetry. For many people now, Muppet and puppet are practically synonymous.

Henson created a merging of puppetry (using the hands for the mouth movements) and marionettes (in their use of wires and how animated their movements are). Before television, puppetry was a fairly static art. Henson made the Muppets almost hyper-kinetic, putting a lot of energy into the performance. Furthermore, the way the puppets were operated, for example making them look directly at something (typically with a puppeteer's hand directly manipulating the head), gives them a remarkably lifelike appearance. In addition, while puppeteers in previous productions hid behind a structure on screen in keeping with tradition, Henson realized he could just stage his show using the TV screen frame itself in order to hide the operators and focus all attention on the puppets.

As such, the typical puppet like Kermit the Frog would have one functioning left hand while the right hand operates the head, although characters like Rowlf or Ernie have a second puppeteer who operates the right hand. The Swedish Chef is an exception: two puppeteers work together with one handling the head and voice while another use their own hands for the character.

Animatronics was also improved by the Jim Henson shop. Animatronics employs a complex series of mechanics to create a creature with much more subtle movements and expressions than a standard puppet, such as blinking eyes or opening gills. A puppeteer may often wear a full body suit with an animatronic head controlled by another person. Henson didn't consider them to be "Muppets", though most people ignore that distinction. The mouth, head and neck of animatronic puppets are usually controlled with a device called a "waldo", a kind of large electronic mitten that's wired up and can control the creature remotely.

Now common in children's shows, Muppets became widespread due to their popularity in Sesame Street, a Henson co-production.

A common sub-type is the Hand Puppet. For CGI characters, see Serkis Folk.

In British slang, the word can be an insult, indicating someone who is, although enthusiastic, clueless and incompetent. If you're looking for the entry on the franchise, you can find it here.

A recurring character in the Panic! At The Disco mythos is a muppet version of its lead singer.

A recurring character in the Panic! At The Disco mythos is a muppet version of its lead singer.