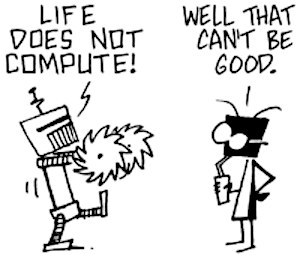 Congratulations kid! You've got your first Robot Buddy, Ridiculously Human Robot, or Do-Anything Robot! But before you start playing with it and going on magical adventures together, there's a few things you need to know:

Failure to follow any of the previous instructions may result in your robot going haywire, and spouting lines like "Crush. Kill. Destroy!" or "Kill All Humans". In which case, it is highly recommended you hit the Override Command located in [the rest of the instruction manual appears to have been disintegrated.] If you have purchased the Mechanical Monster model, Trope Co. suggests you start running now. note And all sales are final.

Is generally considered to be overused nowadays, so you'll rarely find it used straight in contemporary live-action works, but it still pops up in cartoons for camp value. If it's the focus of an episode, it's a Glitch Episode (and possibly an Unexpectedly Dark Episode if the series doesn't usually involve putting characters in mortal peril). Compare Holodeck Malfunction, which often involves whatever is preventing the Holodeck from killing its participants or escaping shuts down, but continues running.