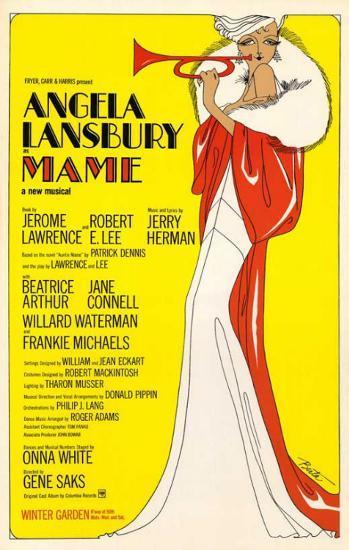 "You coax the blues right out of the horn, Mame
You charm the husk right off of the corn, Mame..."
Advertisement:

A 1966 musical with book by Jerome Lawrence and Robert Edwin Lee and music by Jerry Herman, Mame debuted on Broadway with Angela Lansbury starring in the title role.

Based on the Auntie Mame novels, it tells of the adventures of a young boy, orphaned by the death of his father, being raised as the ward of his wealthy, eccentric, and impulsive aunt during The Great Depression.

It was made into a 1974 film starring Lucille Ball (in her final film performance), with Bea Arthur and Jane Connell reprising their stage roles as Vera Charles and Agnes Gooch respectively. Gene Saks, who'd directed the Broadway production, also helmed the film version.

The musical and film contain examples of: