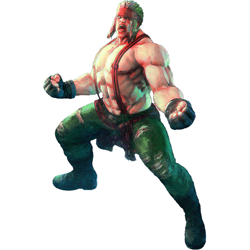 After many years, Alex finally returned in Street Fighter V, as the first DLC fighter. In V, he is kidnapped by Shadaloo's latest enforcer, F.A.N.G, who has him fight holographic projections of other fighters, in order to test his potential as a replacement body for Bison. Alex only escapes by destroying the simulation room, causing F.A.N.G to kick him out and put him back where Shadaloo found him.
Dudley 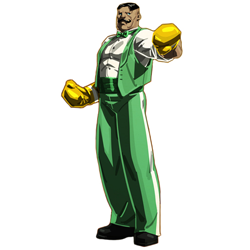 A Ravishing Star in the Sky of Battle 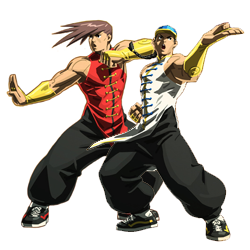 "Cheap? Do you know how much I paid for this cap?!" (Yun)
"Every wound you have is punishment for your careless training." (Yang) 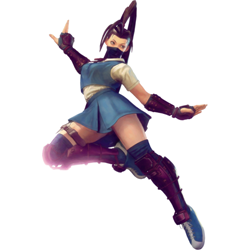 Shinobi of the Summer Breeze

Ibuki returns in SFV sporting a new look, combining her identity as both a schoolgirl and a ninja. Other characters' stories indicate that she had been invited to take part in Karin's tournament.Click here for tropes on her
Necro 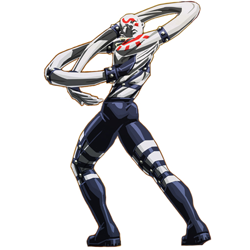 "Freedom was once just a dream, now I can fight to achieve it." 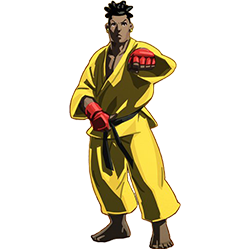 "Wow! That actually worked! Next time I'll do it with skill!" 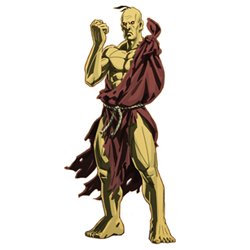 The Enlightened Hermit
"Your moves are deadly... They could kill me by boring me to death!"
Origin: Japan (resides in the Amazon) flag

Fighting style: Senjutsu
Voiced by: note Kan Tokumaru (New Generation and 2nd Impact; Japanese), Takashi Matsuyama (3rd Strike and Street Fighter V, Japanese), Dave Fennoy (Street Fighter V, English)
An old hermit who possesses incredible power. Because of his great age, he has decided that he wants to pass his skills on to Ryu. Akuma has taken note of Oro's strength and wishes to challenge him. He briefly makes an appearance in several characters' stories in Street Fighter V, before finally joining the roster in full for the game's final season of DLC, Season V.
Elena 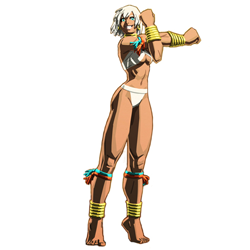 Capoeirista of Wind and Earth 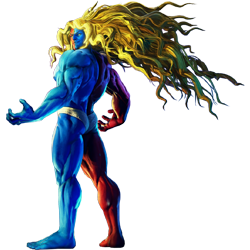 "The mark of my dignity shall scar thy DNA."
"Harmony. That is the truth of what you must seek."

The enigmatic leader of the Illuminati. Gill was raised from birth under the organization's watchful eye and genetically modified in his youth to wield fire and ice power along with his brother Urien, who was given metal and lightning abilities. When he came of age, Gill was granted the title of President. Urien later challenged him for the title and won, but Gill ended up promoted to an even higher position - Emperor. According to a prophecy foretold by the Illuminati, Gill is destined to become the new savior of the world. Thus, Gill manipulates world events to ensure that this prophecy comes to pass.

He appears in V in the ending of the Cinematic Story, revealing the woman known as Helen to be his secretary Kolin in disguise, before finally making his first true playable appearance as the 5th DLC character for Season 4. 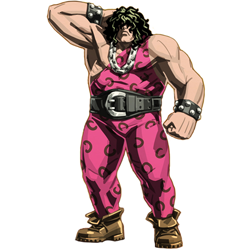 Fighting style: Pro-wrestling
Voiced by: note Scott McNeil (Street Fighter animated series), Wataru Takagi (2nd Impact, SVC Chaos, Street Fighter X Tekken, Ultra Street Fighter IV, Japanese), Len Carlson (3rd Strike), Jim Wallace (Final Fight Revenge), Gerardo Sprigg (Final Fight: Streetwise), Patrick Seitz (Street Fighter X Tekken, Ultra Street Fighter IV, English)
Also known as Andore. A German wrestler and former criminal who went legit, making a name for himself in the American Pro Wrestling Circuit after the Mad Gear gang, who had employed him and his family at the time, was destroyed by Cody, Guy, and Haggar. His manager is the infamous Poison, a good friend of his from his Mad Gear days. In 2nd Impact, he seeks a worthy opponent to join him as a tag partner in the wrestling ring, and then he forms the "Huge Wrestling Army" with the rest of the cast in 3rd Strike.
Urien 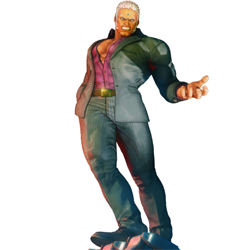 "Kneel before me when in my presence!"

Fighting style: Illuminati techniques
Voiced by: note Yuji Ueda (2nd Impact), Lawrence Bayne (3rd Strike), Masayuki Katou (Street Fighter V; Japanese), Bill Rogers (Street Fighter V; English)
Gill's younger brother, who was passed up to become their organization's "President" and now seeks to usurp his brother's leadership. However, unlike his brother, Urien is not a Well-Intentioned Extremist who wants to help humanity. Instead, Urien is completely power hungry, and only wants to be the leader of the Illuminati in order to essentially rule the world with an iron fist. 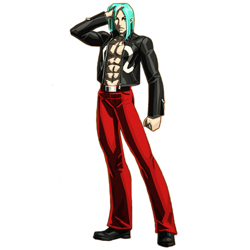 "Victory, glory, and honor... Those ideals don't excite me a bit."

Fighting style: Savate
Voiced by: note Eiji Sekiguchi
A young man abandoned by his father, and whose dead sister is somehow encased in ice. He wanders the world to defeat street fighters.
Q 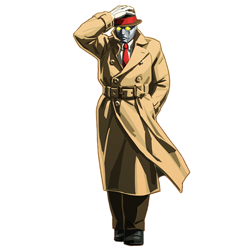 Fighting style: Unknown
Voiced by: note Len Carlson
A mysterious man wearing a trenchcoat and iron mask, who is being pursued by the CIA. Q has been sighted in crime scene photographs of unsolved murders all over the world. Some eyewitness accounts place him in two parts of the world at the exact same time, bringing into question whether there is more than one Q, or if the man in question is even human.
Makoto 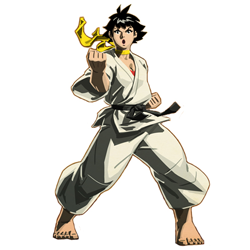 A Bolt of Fighting Spirit

"Rindo-kan Karate is the best! Who's next?!"

Fighting style: Rindo-kan Karate
Voiced by: note Makoto Tsumura (3rd Strike and Super Street Fighter IV, Japanese); Jessica Stone (Super Street Fighter IV, English)
The heiress of the Rindoukan school of Karate, which she inherited after the death of her father. She seeks to restore her school's reputation by challenging other worthy opponents. She returns in Super Street Fighter IV, where she enters the tournament hoping to walk away both the champion (and subsequently put Rindoukan on the martial arts map) and earn a lot of money to rebuild her family's dojo.
Twelve 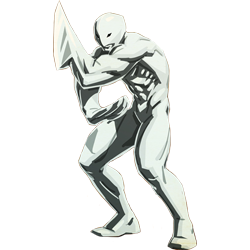 Fighting style: "Hyper adaptation"
Voiced by: note Lawrence Bayne
Twelve is a mutant, part of the G-Project, a biological warfare operation run by Urien. Sent to pursue Necro, his prototype, Twelve is genetically engineered to regenerate, form other shapes (usually weapons) out of his body, copy a person's appearance and skill, and is also being mass produced by the organization to create an army of Twelve-like creatures.