With My Hands Tied 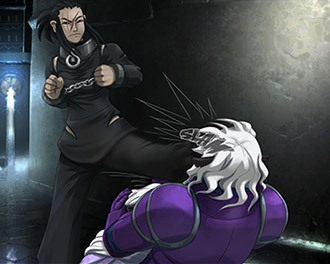 "I bet I can take you both with my hands tied behind my back!"
— Aang (who promptly does so), Avatar: The Last Airbender
Advertisement:

So you've captured the hero, and have him at your mercy, but don't kill him just yet. So tie the guy up and leave him, he'll be harmless for now, right?

Wrong! What Were You Thinking?

Most heroes are so badass that they can outfight your Mooks even while they're physically restricted. Their hands might be tied, but they can still kick. Chained down, they can still dodge. Shackle two together and you'll just have Back-to-Back Badasses. Plus the odds are pretty good that they'll make clever use of their binding, as garottes, club, or flails — see Handy Cuffs. And also that they'll be Breaking the Bonds.

In some modern works, this is parodied by having the characters willingly impose a handicap to make things "fairer" for the enemies. The hero will make some Badass Boast to "fight you with one hand tied behind my back!" (or even both hands) and the villain will take him up on it thinking he's crazy. Maybe he is crazy, or maybe he isn't, and the villain will be in for a very big surprise.

Both her hands are trapped in wrist shackles. Doesn't stop her from wielding her sword well, though.

Both her hands are trapped in wrist shackles. Doesn't stop her from wielding her sword well, though.