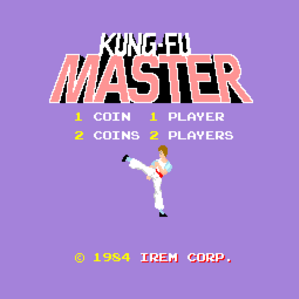 "Your love Silvia is in custody now. If you want to save your dear Silvia's life, come to the Devil's Temple at once. 5 sons of the devil will entertain you."
— Mr. X, game intro to Kung Fu Master
Advertisement:

Kung-Fu Master is a 1984 Arcade Game released by Irem, also known as Kung Fu in its 1985 NES port and Spartan X in Japan (all versions except for the MSX one, which was titled Seiken Acho due to the existence of Jackie Chan in Spartan X, a different MSX game by Pony Inc.). Playing as martial artist Thomas, you get to kick, punch and jump-kick an horde of...rather grabby enemies and acrobatic midgets throughout 5 straighforward stages.

The original game's plot is quite simple: the mysterious Mr. X kidnaps Thomas' girl, Sylvia, and leaves a letter challenging him to rescue her by going through a 5-floor pagoda known as Devil's Temple, fighting against his hordes of grabby mooks and the 5 Sons of the Devil (the Stick Fighter, Boomerang Fighter, Strongman, Magician and Mr. X himself).

There were two sequels made for the console market. A Game Boy version of Kung Fu Master/Spartan X released in 1990, dealing with Thomas, now a secret intelligence agent, as he investigates the disappearance of scientist and engineers known in the field of weapon development, and the apparent involvement of mysterious millionaire and martial artists Zapp Morgan. Now Thomas has to face Morgan's contracted killers (Chainsaw Man, Napalm Bomber, twin Ninjas and the return of Strongman) plus hordes of still very grabby mooks. The game plays identical to the original, albeit Thomas has a new flying/cartwheel kick attack and stages now have moving platforms and traps.

And then there's Spartan X 2, released in Japan in 1991 for the Family Computer, and advertised but not released for the NES as Kung Fu II. Now going by the name Johnny Spartan (the manual revealing his original full name as Johnny Thomas), he's a police officer who lost his family in an incident with a new type of drug, which his father was subjected to. Quitting the corrupt police force, he becomes a secret service agent in order to track the drug route and find the mastermind, which turns out to be man named Caeson Hawk. Johnny confronts many drug smugglers and dealers (Flames Joe, Chin Gensai, Billy Beiry, Mr. Benjamin and Murder Lin), and once again very grabby mooks on his crusade against Caeson. Sylvia shines by her absence, with Johnny instead getting assistance from Tracey, his HQ contact, as well as his heavily-stressed chief, Steve. Just as before, two new moves are given to Johnny in the form of a Shoryuken-esque rising uppercut and an overhead throw.

If you were looking for Mr. Miyagi and co., see Mentors. Also not to be confused with the film and TV series starring David Carradine.