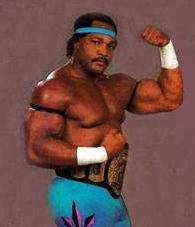 Ronald Simmons (also otherwise known in-ring as Faarooq, born May 15, 1958) is a semi-retired American professional wrestler who wrestled in numerous promotions, first in Florida, then in WCW and ECW, and most notably in WWE from 1996 to 2010, when he retired. He continues to show up at WWE events to this day, however. He defeated Big Van Vader for the WCW World Heavyweight Title

, making him the first black wrestler to be a World Heavyweight Champion.

As a WWE wrestler, Simmons was the leader of The Nation of Domination stable entirely composed of black men, which included Mark Henry and The Rock. He also formed one half of the Acolytes (repackaged as the Acolytes Protection Agency), the other being John "Bradshaw" Layfield.

In 2012 he was inducted into the WWE Hall Of Fame.