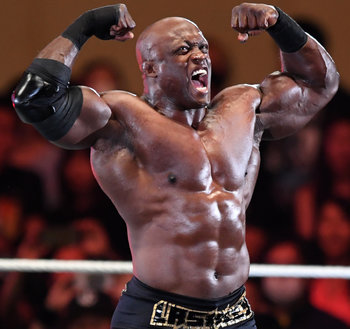 His professional wrestling started in WWE's developmental promotion Ohio Valley Wrestling, which included a run as a Heel as "Blaster Lashley" as a member of Bolin Services. He made his surprise WWE TV debut on the September 23 (taped September 20), 2005 WWE SmackDown! in response to Simon Dean's open challenge. Across his two WWE runs, he is a two-time ECW Champion, a two-time Intercontinental Champion, a three-time United States Champion, and a two-time WWE Champion. On March 1, 2021, he defeated The Miz for the WWE Title

. Meanwhile, in TNA, he is a 4-time World Heavyweight Champion

, as well as a former X-Division Champion and the final King of the Mountain Champion. As a mixed martial artist, he has won the Xtreme Fight Night Heavyweight Championship and Shark Fights Heavyweight Championship. In September 7, 2021, Pro Wrestling Illustrated declared him the third best wrestler of the year, behind Kenny Omega and Roman Reigns.