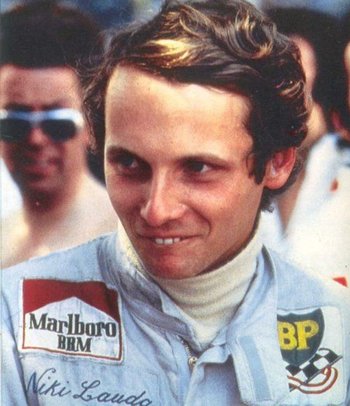 The Rat.
I hope they say I was always straightforward. No bullshit or grey areas. I hate that.
— Niki Lauda
Advertisement:

Arguably one of the greatest racing drivers of all time, Andreas Nikolaus "Niki" Lauda (February 22, 1949 – May 20, 2019) was perhaps best known for the intense rivalry he had with James Hunt, and that close brush with death he had in Nürburgring that left him scarred for life but scoffed it off and continued racing just weeks after the crash.

Born to a family of wealthy paper manufacturing industrialists, Lauda took up a career in racing in spite of his grandfather viewing it as a recklessly pointless pursuit. Disowned by his folks for his preference for cars over following their trade, Niki was left to his own devices and went racing in Minis and Porsches, and had to buy his way through the ranks as a Formula Two driver, and through Clay Regazzoni (who vouched for Lauda in front of team boss Enzo Ferrari) eventually found his way in Scuderia Ferrari and was able to clear his debts. His stint at Ferrari culminated in what would go down in history as an intense rivalry between him and McLaren driver James Hunt.

And then came the incident in 1976 where he and Hunt raced in Nürburgring. He was initially against the idea of racing there, citing safety issues and urging fellow drivers to boycott the race; Lauda and the others went on anyway. The rest would change the Austrian forever — his Ferrari swerved off the track, hit an embankment, burst into flames, and made contact with Brett Lunger's Surtees-Ford car. Lauda was trapped as his fellow racers struggled to extricate him from the burning wreckage, inhaling toxic gases which damaged his lungs and blood and sustaining severe burns to his face and head. Just as when it was certain that he was going to die from his injuries, being administered the Last Rites and all, he somehow survived the ordeal and, against all medical advice, went on to win fourth place in the Italian GP, with wounds still fresh from the accident and in pain. Hunt took advantage of Lauda's absence to further reduce his deficit, and Ferrari hired Carlos Reutemann as Niki's replacement. In spite of his horrific injuries, Lauda limited the reconstructive surgery to his eyelids for them to work properly, choosing instead to wear his trademark baseball cap to cover his head scars and even went so far as to sell advertising space on his headpiece.

The final race of the 1976 season saw Lauda call it quits on the second lap of the Japanese GP, mostly out of fear for his own safety, exacerbated by his fire-damaged tear ducts and inability to blink — James Hunt went on to win the championship by a mere point ahead of his rival, his sole championship victory. Niki's withdrawal also left a sour note on Ferrari, and while he won next year's title, disagreements with the Prancing Horse caused him to leave the team in favour of Brabham, whose stint was all but unsuccessful. A disillusioned Lauda left racing for a while as his desire to "drive around in circles" wore off and went on to manage his airline company, Lauda Air, full-time, which in hindsight was kind of ironic considering how the Laudas wanted Niki to follow family tradition only for him to take up racing, but eventually became a businessman himself.

1982 saw him return to racing under Hunt's old team, McLaren, partly because he needed more capital to run his fledging airline business. Lauda and Didier Pironi led a drivers' strike during the South African GP, in protest of a superlicence ruling by FISA which tied drivers to a single team for three years. Two years later, Lauda scored his third and final World Championship trophy; he would later retire for good in 1985 and went on in management roles and as a colour commentator in German television, also acting as non-executive chairman of Mercedes-AMG Petronas Motorsport, having been responsible for signing Lewis Hamilton into Mercedes.

He also founded and ran two more airlines: Niki, and Laudamotion, later renamed as simply Lauda and has since become a Ryanair subsidiary. As he bore a commercial pilot's licence, he even went hands-on with his business and occasionally acted as air captain, though his crew would carry an oxygen tank as a precautionary measure due to his lung condition. Such was his hands-on approach that right after the infamous Lauda Air 004 crash, of which he described as the worst period in his life, he personally took it upon himself to investigate the incident,note Exacerbated by the fact that even the flight data recorder was destroyed (sort of like a logcat for Unix or something along those lines), though the voice recorder remained intact. It also didn't help that looters pillaged the scene, not only desecreating the victims' personal effects but also tampering whatever potential evidence which could have been used in the investigation. and found that there's little the pilots could do in an accidental thrust reverser deployment upon trying out the simulator for himself, in spite of Boeing's insistence that it is possible. His actions pressured the airplane manufacturer to provide compensation to the victims' relatives and revise their 767s with safety locks on the reversers.

Lauda's rivalry with James Hunt was dramatised in the 2013 sports film Rush, directed by Ron Howard and Lauda played by Daniel Brühl. Besides making a cameo appearance in the latter, he previously had a brief cameo as a bystander in an episode

of the German-Austrian TV series Heiteres Bezirksgericht, has appeared in a number of commercials promoting his airline, and played As Himself in a few films, two of them being the little-known made-for-TV Sci-Fi children's adventure movie Top Kids in 1987, where he appeared as a time traveller being transported into various moments in automotive history, and the 1990 Roger Moore sports movie Fire, Ice and Dynamite. Lauda also voiced Strip "The King" Weathers in the German dub of Cars.

A Lawyer-Friendly Cameo of Lauda appeared in McLaren's Tooned as "Lautfinger", being depicted as James Hunt's arch-nemesis in a James Bond parody episode. While he himself could have been featured in a McLaren 50 episode, his employment as a non-executive chairman in the Mercedes F1 team contractually prevented him from making an appearance.

Lauda died in May 20, 2019 due to kidney complications following a lung transplant and a period of ill health.