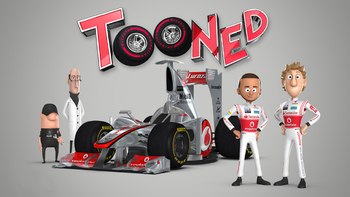 Season 1 title card.
A CGI animated cartoon presented by the McLaren Formula One team, Tooned shows the madcap adventures of Lewis Hamilton (later replaced by Sergio Pérez following Hamilton's departure from the team), Jenson Button, and the rest of the McLaren team, whose research team is headed by Professor M, voiced by comedian Alexander Armstrong.
Advertisement:

McLaren commissioned Tooned as a way to further promote their team and reach out to younger audiences, who make up a portion of the F1 fanbase. The show is written, directed and animated by Chris Waitt and Henry Trotter and visual effects house Framestore.