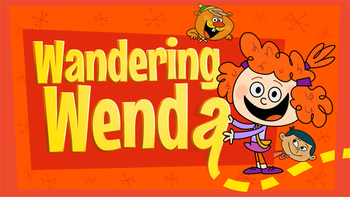 Wandering Wenda (also known as The Wide World of Wandering Wenda) is a 2017 Canadian animated series from Breakthrough Entertainment (previously known for Atomic Betty and Jimmy Two-Shoes) that aired on CBC Kids. It is the Animated Adaptation of the children's book Wandering Wenda and Widow Wallop's Wunderground Washery, which was written by the legendary Canadian author Margaret Atwood (who works on the series as an executive producer).

Aimed at preschoolers and kids just learning to read, Wandering Wenda teaches kids about words, sounds, and language through the adventures of Wenda and her friends Wesley the woodchuck and Wu, as they travel the world on all sorts of wild, weird and wonderfully exciting adventures jam-packed with alliteration featuring every last bit of vocabulary from each letter in the alphabet that the writers could possibly jam into 26 episodes of 8 minutes of children's television.

This was the final children's cartoon to be produced by Breakthrough Entertainment before they sold the rights to most of their animated kids' library to 9 Story Media Group in 2018.