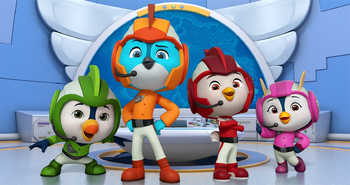 From left to right, Brody, Swift, Rod, and Penny.
Advertisement:

Top Wing is a short-lived Canadian computer-animated Nick Jr. series produced by Industrial Brothers and 9 Story Media Group, in association with Nickelodeon, that premiered on November 6, 2017. It was created by Matthew Fernandes, whose other credits include a number of shows for CBC Kids such as Dex Hamilton: Alien Entomologist, Remy & Boo, Dino Ranch, and Kingdom Force.

Set on Big Swirl Island, an island populated by various animals, the series follows four eager young birds—Swift, Penny, Brody, and Rod—who attend the prestigious Top Wing Academy as new cadets to earn their wings by helping their community. With the supervision of their instructor Speedy and mechanic Bea, the cadets take on different missions for their rescue skills and also help those in need, all while learning important life lessons.

The entire first episode was leaked on the Nick Jr. app on October 7, 2017. The series also airs on Treehouse TV in its home country of Canada.

The series was not renewed for a third season and the final episodes burned off from June 15 - July 2, 2020.

The opening theme to Top Wing.

The opening theme to Top Wing.