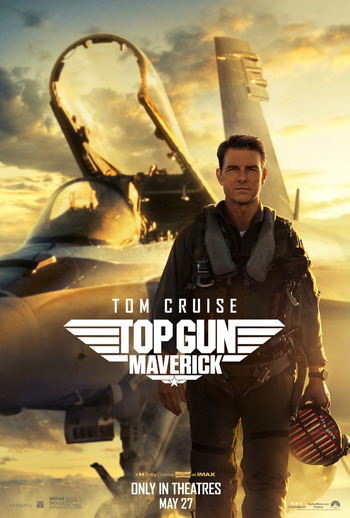 "Talk to me, Goose..."
Admiral "Hammer" Cain: The end is inevitable, Maverick. Your kind is headed for extinction.
Maverick: Maybe so, sir. But not today.
Advertisement:

Top Gun: Maverick is a 2022 American action/military drama film and the sequel to 1986's Top Gun. It is directed by Joseph Kosinski (TRON: Legacy, Oblivion) with a screenplay written by Peter Craig, Justin Marks, Christopher McQuarrie and Eric Warren Singer.

Tom Cruise reprises his role as US Navy aviator Peter "Maverick" Mitchell, who, after a 30-year career, hasn't been able (or did not want) to Rank Up beyond Captain. An unauthorized hypersonic jet test flight gets him in trouble... which gets him sent back to the formernote the Navy moved the training program out of San Diego in 1996 home of TOPGUN at Naval Air Station North Island in San Diego, this time as a flight instructor. There, he finds himself having to train a whole team of elite pilots for a perilous mission. The team happens to include Bradley Bradshaw (Miles Teller), the son of Maverick's late friend Nick "Goose" Bradshaw.

A—H
I—N
O—Z
"My dad believed in you. I'm not going to make the same mistake."