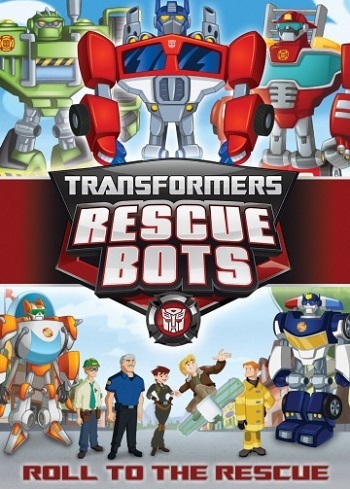 Transformers: Rescue Bots is a series in the Transformers franchise, targeted towards younger children than it's comparatives: Transformers: Prime and Transformers: Robots in Disguise (2015). Two episodes first aired as a sneak preview in December of 2011, with the series premiering properly in 2012.

Set in the "Aligned continuity", the series focuses on Heatwave, Chase, Blades, and Boulder, the last surviving group of "Rescue Bots", who come to Earth in response to Optimus Prime's message to Autobots scattered across the universe. However, rather than roll out for battle, Optimus has a different task in mind for them: acting as ambassadors to humanity and working as "Rescue Bots" once again. They are instructed to masquerade as advanced machinery and work with the Burns, a family of first-responders who live and work in the town of Griffin Rock, a technologically advanced town that's on the cutting edge of scientific advancement.

With Chase partnered with police chief Charlie Burns, Heatwave with fireman Kade, Blades with helicopter pilot Dani, and Boulder with engineer Graham, the humans, save for Charlie, are initially unaware of their new vehicles' true identity as alien robots. That is, until the youngest member of the family, Cody, deduces the truth and befriends the alien machines. Soon enough, the secret becomes known to the whole family, and together, they work to save the people of Griffin Rock from all manner of natural disasters and science gone awry.

As it's targeted towards a (slightly) younger demographic, Rescue Bots is considerably Lighter and Softer than other Transformers media, focusing on telling more lighthearted stories about rescue operations and teamwork, rather than on the war with the Decepticons, as most Transformers series do. However, the series does take some Broad Strokes from current Transformers media, particularly that of its sister series, Transformers: Prime, and even has characters from Prime and its sequel series Transformers: Robots in Disguise (2015) cross over once or twice (plus vice versa on one occasion). Rescue Bots also uses an animation style similar to that of My Little Pony: Friendship Is Magic and has a fairly impressive voice cast, including Steve Blum, Maurice LaMarche, and LeVar Burton. Peter Cullen makes frequent guest appearances as Optimus Prime.

This being a Transformers series, Rescue Bots has an accompanying toy line (which predates the show). Just as the animated series is targeted towards (slightly) younger viewers than previous Transformers series, so too are the toys, featuring simplistic transformations and playsets as well as tie-in stories packaged with the toys themselves.

Now has a Recap Page.