This Billboard Needs Some Salt 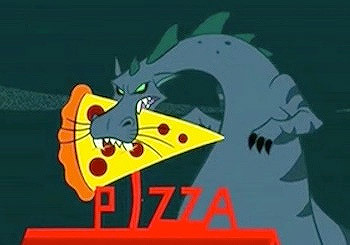 The 50-Foot Whatever is rampaging across town, bringing death and destruction. Suddenly, it sees a billboard, or an advertisement, or a plastic decoration that depicts some kind of food. Without second thought, the monster picks it up and proceeds to eat it, thinking it is actual food. For an added bonus, the sign will effectively be actual food. Too many cartoons to mention have had coffee shops with a giant mug and donut on the top, only to have a nearby giant dunk the donut in the mug with a brown splash.

A shop that is Shaped Like What It Sells is liable to fall victim to this trope. Same for any vehicle that's shaped like food.

Has nothing to do with Chewing the Scenery, though the two can overlap.