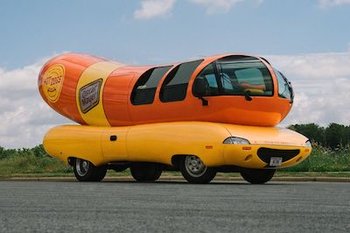 The Big (Hot) Dog of them all.
Advertisement:

One of the most important steps towards starting or growing any kind of business is the simplest, yet one of the most difficult to actually pull off: getting your name and product out there, and making sure people remember who you are. That one truism explains so much about the commercials you see on television: yeah, that commercial may have been stupid and annoying as hell, but if you remember it...well, mission accomplished.

Of course, there are other ways to get people's attention that don't involve annoying commercials or manufactured viral ad campaigns; you could just create something that people don't see every day, and use that as an attention-getter. Something like...say, a van shaped like a 6-ton version of your new snack cake. It'll certainly get bystanders' attention and maybe some exposure on social media, and with a good marketing acumen and a bit of luck, you could parlay that into a successful ad campaign.

Using vehicles as billboards to advertise products is nothing new — just look at any commerical bus or public transportation — but The Dinnermobile takes the idea to its logical extreme: the food item is not on the vehicle, the food is the vehicle. It refers to vehicles that are actually shaped like a piece of food — a hamburger, a hot dog, a carton of milk, and so on.

While The Dinnermobile is most commonly used as a real-world advertising trope, the general concept (with or without the advertising bent) is also popular in visual media aimed at young children: cartoons, picture books, and so on. Even when they're not trying to sell food, food-shaped cars are memorable, whimsical, cute, and even funny. Some fictional media even take the idea a step further, making the food-based vehicles out of actual food that may or may not be wholly or partially eaten by the end of the episode.

While most foods could theoretically be designed into a vehicle, things like hot dogs, hamburgers, and fruits are among the most common design choices for Dinnermobiles. This is partly a matter of precedent — after all, the iconic Oscar Mayer Weinermobile popularized the concept — but it's also a matter of practicality. These foods tend to have shapes that are relatively easy to design a vehicle around: they're fairly symmetrical, compact, proportionate, and three-dimensional. Or, more to the point, they're not flat, ridiculously wide or tall, full of appendages sticking out of the sides, or anything else that would make them impractical or even unsafe to drive as a vehicle. That's why a sausage-shaped car makes sense, but even the idea of a car shaped like a thin-crust pizza would give any automotive engineer a migraine.

Subtrope of Shaped Like What It Sells. As an advertising device, compare and contrast Anthropomorphic Food, where companies advertise food by, uh, giving it sapience?

In more fantastical fictions, Dinnermobiles may be driven by Anthropomorphic Food, or a regular character for whom the car resembles a Trademark Favorite Food. If a video game has a Level Ate, then it's highly likely that at least one of these will make an appearance. If the car is especially delicious-looking but not actually edible, a character might go Extreme Omnivore and devour it anyway. Likewise, driving one of these cars may result in being chased by any number of assorted stray animals.

For cases where the food-shaped item is a stationary building, see Bizarchitecture.