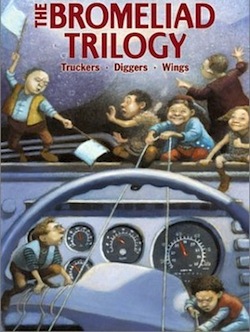 A situation that regularly appears in works with miniature protagonists is to have them operate a car, airplane, spaceship, or other vehicle. Since the vehicle was built for larger, "regular"-sized people and is not a Surprisingly Functional Toy, this will require a team of the diminutive characters working together to operate the numerous controls. Jury-rigged assistive devices made with Bamboo Technology or Noodle Implements might be used.

More often than not, Hilarity Ensues as the Dysfunctional Family or Rag Tag Bunch Of Misfits fail to coordinate their operations — they end up bickering with each other while their vehicle careens all over the place. If the characters wouldn't normally know how to operate the vehicle, Taught by Television or I Know Mortal Kombat may be invoked to explain how they suddenly acquired some driving skills.

Naturally, this typically involves Lilliputians, Living Toys or very Little People, though other character types may be used as the work demands.

See also Kids Driving Cars, which may overlap with this trope in some cases (i.e. if two or more kids are cooperating to drive a single car).

To be fair, it's definitely not the weirdest thing this cartoon's ever shown!

To be fair, it's definitely not the weirdest thing this cartoon's ever shown!