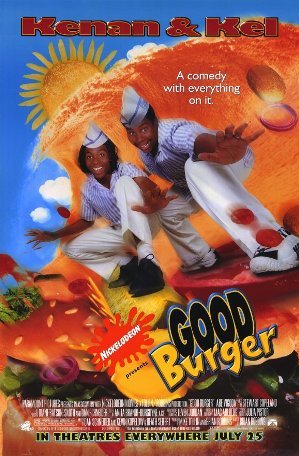 Not just knee deep, she was totally deep, when she did the freak with me.
"Welcome to Good Burger, home of the Good Burger! Can I take your order?"
Advertisement:

Good Burger is a 1997 comedy film produced by Nickelodeon Movies and released by Paramount Pictures, directed by Brian Robbins and produced by Dan Schneider and starring Kenan Thompson, Kel Mitchell, Sinbad, Shar Jackson, Abe Vigoda, and Jan Schweiterman. (Carmen Electra, Shaquille O'Neal, Linda Cardellini, in her film debut, Marques Houston and George Clinton make brief cameo appearances.) The film was based on a popular recurring sketch on Nickelodeon's sketch show All That, with Mitchell reprising his role as an airheaded fast food cashier. It is, to date, the only Nickelodeon Movie based on one of their live-action shows (as opposed to one of their Nicktoons). It was preceded in theaters by the Action League NOW! episode "Rock-A-Big-Baby".

In the film, Thompson plays Dexter, a high-school student that is forced to work at Good Burger after crashing his mother's car into his teacher's car. The restaurant is also rivaled by Mondo Burger across the street, a menacing mammoth chain that could easily make Good Burger a piece of history. But Good Burger is not going quietly into that good night, as Dexter's new co-worker Ed has concocted a special sauce (based on In-N-Out's secret sauce) that makes Good Burger the hottest burger joint in town, and Mondo Burger is determined to steal the sauce recipe and their customers. Dexter and Ed team up to beat their competition and end up unearthing a dark secret.

Got a sequel in novel format in 1998 called Good Burger 2 Go.

The trope page is already over? Is it because I'm black?