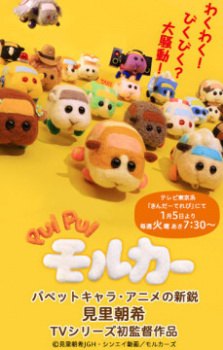 Pui Pui Molcar is a Stop Motion series of shorts created by Shin-Ei Animation and directed by Tomoki Misato (previously known for his Tokyo University of the Arts short films Atashi Dake wo Mite and My Little Goat). The series began airing during the Winter 2021 season, with episodes uploaded weekly onto the Bandai Namco Arts YouTube channel.

This series focuses on a world where Molcars, vehicles that look and act like giant guinea pigs, are the most common mode of transportation. Most episodes will follow them as they get through their day, but there will be plenty of wacky adventures awaiting them as well. Five Molcars maintain focus: the courageous Potato, the shy Shiromo, tomboyish Teddy, elegant Choco, and the greenhorn Abbey are the stars.

Netflix announced that they would be bringing the series worldwide in March. It made a proper television debut on the children's program Kinder TV in January. In addition, the DVD/Blu-ray home release announced two additional shorts that came with the original twelve episodes. Summer 2021 introduced a theatrical compilation film and a mobile game.