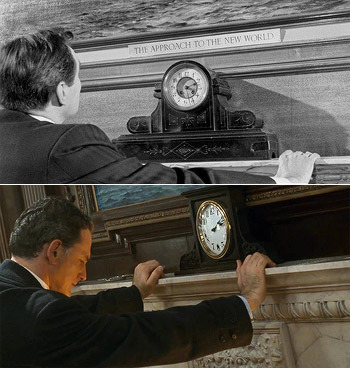 Film directors start out as movie buffs, often of the most obscure sorts of films. On top of that, many modern directors went to film school and saw hundreds of legendary movies. Even after they get to direct movies of their own, they often love to use angles, compositions, and shots they saw in school. Of course, all directors use tricks and shots invented long before. But while anyone can do a Power Walk, it takes skill and devotion to light and shoot a power walk exactly like Philip Kaufmann did in The Right Stuff (especially if your film isn't about astronauts).

This trope does not count deliberate parody, or remakes of old movies, unless it's a new adaptation from the original medium. (Peter Jackson's The Lord of the Rings trilogy qualifies for this trope, while the remake of Psycho does not.) Something similar occasionally appears in comics, but the comparative ease of copying (light tables) makes it hard to tell the homages from the flat-out swipes.

Occasionally this is Inspiration Nod, but usually it's more of a Shout-Out to a director that inspired them to get into the business. It's Art Imitates Art of cinema. If the homage is referential to a series or property's own past, it's an Internal Homage.

Examplesnote sorted by the work in which the homage occurs

When Angry Video Game Nerd and Nostalgia Critic team up against the Michael Bay TMNT films, they do an homage to the original 1987 series, complete with a shot-for-shot remake of its opening.

When Angry Video Game Nerd and Nostalgia Critic team up against the Michael Bay TMNT films, they do an homage to the original 1987 series, complete with a shot-for-shot remake of its opening.