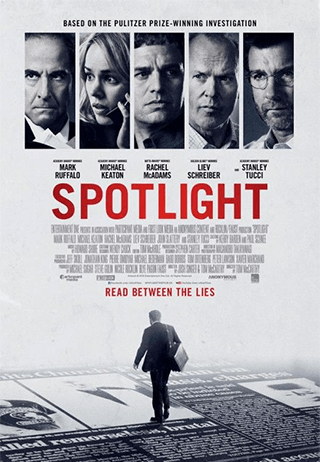 ”...and you will know the truth, and the truth will set you free.”
"When you’re a poor kid from a poor family and when a priest pays attention to you, it’s a big deal. How do you say no to God?"
Advertisement:

In 1973, journalists Bob Woodward and Carl Bernstein, with the aid of Washington Post director Ben Bradlee, uncovered a trail of shady connections that linked a burglary at the Watergate Hotel to president Richard Nixon himself, resulting in the biggest political scandal in American history; the story would eventually be memorialized with the 1976 film All the President's Men. In 2002, Bradlee's son would uncover a similarly impactful and damaging scandal alongside the staff at The Boston Globe, this time surrounding the American branches of the Catholic Church. This is the film which memorializes that story.

Spotlight is a 2015 film directed by Tom McCarthy. It tells the Real Life story of the investigative team of the Boston Globe during the early 2000s as they researched and released the first major report on sex abuse in the Catholic Church, a series which won them the Pulitzer Prize for Public Service in 2003.

Marty Baron arrives in Boston as new editor of the Globe, and assigns the Spotlight investigative team to follow a trail of lawsuits pertaining to a priest accused of sexual abuse some years in the past. As they dig deeper, meeting with traumatized victims, corrupt clergy, and complicit lawyers, they discover that the menace of child sexual abuse in Boston's Catholic parishes runs deeper than anyone suspected. Starring Michael Keaton, Mark Ruffalo, Rachel McAdams, John Slattery, Liev Schreiber, and Stanley Tucci.

The Boston Globe has a special landing page

for the film, which includes all of the real articles that won the team the Pulitzer, plus several new pieces from the Globe reporters detailing their experiences with the production of the film.