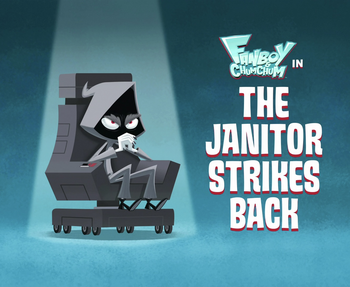 Whaddaya mean, "that sounds familiar?"
Judy: Yeah, that's right... Dr. Gary was gonna take my braces off. Have you seen the movie Face/Off? Well, this rhymes with that. This was Brace/Off.
Crispin: Yes! My favorite kind of story is one that rhymes with another, unrelated story.
—The Great North, Season 2 "Brace/Off Adventure"
Advertisement:

A Sub-Trope of Pun-Based Title which applies to individual episode titles, where the pun is based upon some element of popular culture, such as the title of a film, book or song. Catch Phrases, song lyrics, adages and colloquialisms can also be riffed on.

Also a sub-trope of Idiosyncratic Episode Naming. This trope also highly overlaps with Shout-Out. Related to Literary Allusion Title and can sometimes overlap.

Often a sign of a Whole Plot Reference; indeed, many of the subtropes listed on that page (like Charlie and the Chocolate Parody) are examples themselves.

The title is a pun of Face/Off, which Judy lampshades and does a Title Drop when explaining to her friend.

The title is a pun of Face/Off, which Judy lampshades and does a Title Drop when explaining to her friend.