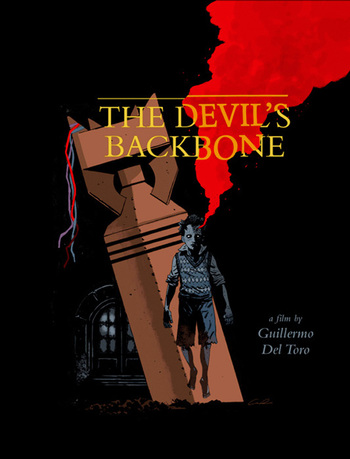 The Spanish Civil War enters its final stage. Casares and Carmen, both supporters of the Second Republic cause, operate a small orphanage in a remote part of Spain, along with the groundskeeper Jacinto and a teacher, Conchita. Casares and Carmen keep a large cache of gold to help support the treasury of the Republican loyalists, making this remote site a frequent target of Franco's troops; an unexploded bomb waits to be defused in the orphanage's courtyard.

When a small boy named Carlos arrives there, he believes that he is only staying until his father returns from the war. However, Carlos is about to learn that more than the living dwell here, as he starts seeing an apparition he cannot explain, and hears tales of a boy named Santi who disappeared the day the bomb showed up.

The Devil's Backbone (Spanish title: El espinazo del diablo) is a 2001 Mexican/Spanish Gothic Horror film written and directed by Guillermo del Toro. It stars Fernando Tielve, Íñigo Garcés, and Eduardo Noriega. del Toro has stated on the DVD that, along with Hellboy, this was his most personal project. Has a "sister film" in Pan's Labyrinth, and supposedly one day will have a third installment called 36/63, if del Toro ever gets around to it.

The Devil's Backbone contains examples of: