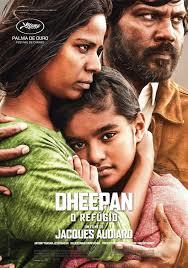 Dheepan wants to flee from Sri Lanka. In order to be accepted as a refugee in France, he pretends to have a wife, Yalini, and a daughter, Illayaal. Yalini and Illayaal are actually perfect strangers. The fake family arrives in France and settles into a poor area, where criminality is rampant.