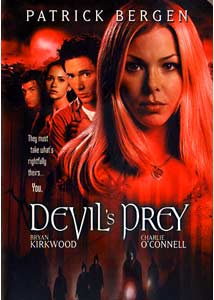 Devil's Prey is a 2001 horror B-Movie of the slasher variety. It revolves around five college kids who get invited to a rave and run into a girl who claims to have escaped from a group of Devil worshippers called "The Shadows" who were planning to sacrifice her. The Shadows waste no time in tracking down the girl and want to capture the rest of the kids for helping her.

The film veers into So Bad, It's Good territory given its obvious low budget and patchy acting but it still manages to entertain with its good plot and actual Character Development unusual for a slasher film.