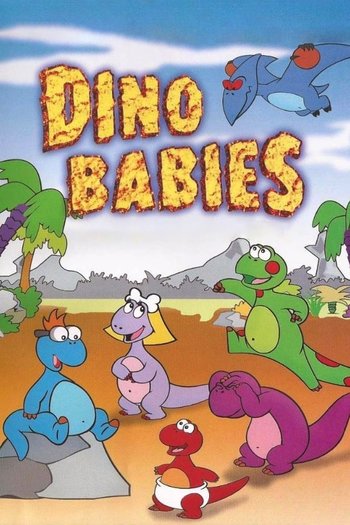 Dino Babies is an extraordinary cute and cuddly cartoon for younger children by DiC Entertainment, which was broadcast in 1994.

Ah, dinosaurs! How they frighten us with their big teeth and giant claws! Well, not these! The Dinobabies consists of a group of Yoshi-esque baby dinosaurs and their own adventures around the Land That Time Forgot. Truman is the smartest lead of the group. He's Blind Without 'Em, but very clever with his stories. He wishes the only girl in the Dinobaby group, La Brea, would stop challenging his authority. Stanley has orange spots all over and is very brave and happy-go-lucky! Franklin is a Cowardly Sidekick to the group. He has a little brother called Marshall, the youngest of the group, who wears diapers, a la Pinga. Dak seeks all the attention he wants.

The show was first broadcast in the UK on The BBC in 1994, but in America, the show was also broadcast on syndication.