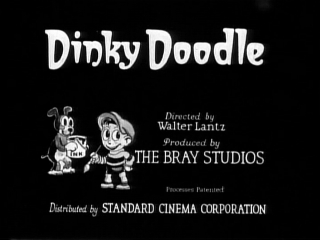 Dinky Doodle was a cartoon character created by Walter Lantz for Bray Productions in 1924. Dinky was a standard boy character, sporting a flat cap, a striped shirt, and dark shorts. He and his dog Weakheart appeared alongside Lantz himself (as the cartoonist) in a series of short films that combined live-action and animation, similar in style to Max Fleischer's Out of the Inkwell series, as well as Walt Disney's Alice Comedies.
Advertisement:

Dinky Doodle enjoyed a degree of popularity among audiences, but was retired from the screen in 1926. He was later (mockingly) mentioned as someone supposedly kidnapped when Angelo mocks Eddie Valiant for working for a toon in the 1988 film Who Framed Roger Rabbit.

A history of the series can be found here