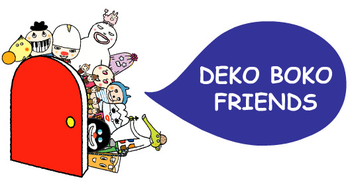 Deko Boko Friends is a Japanese animated series of 30-second-long episodes for preschoolers that aired from 2002 to 2011. It originated as a segment on the Japanese kids show Okaasan to Issho on NHK, and was shown on Noggin in the United States and Treehouse TV in Canada. It is the only Okaasan to Issho segment to see an international release.
Advertisement:

The series is about different characters that represent various personalities, quirks, etc.; the idea is that they teach kids that it's okay to be different. Characters include (but are not limited to) a person with a chestnut for a head named Nut n' Nose, a guy with piano keys for teeth named Ken Bahn, a group of acorn kids called the Acorn Tots, and a person with a watering can for a head named Water Chap.

The setting of every episode is a white void containing nothing but a red door. A character comes out of the door and presents themselves to the viewers, and then finds themselves doing some kind of activity. At the end of each episode, the character says good-bye to the viewer.