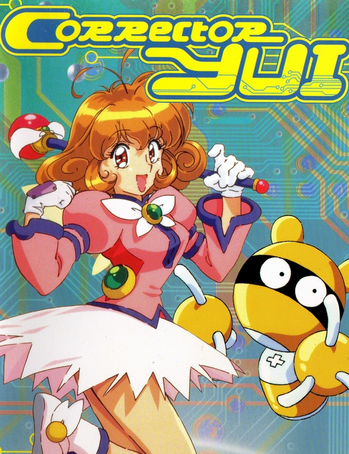 Your Virtual Magical Girl is here!
"You'll go into the recycle bin and be empty-empty-emptied!"
Advertisement:

After Kia Asamiya created Steam Detectives for his son, he looked yet again into an unfamiliar genre, this time for his daughter, who was a fan of Magical Girls. He came up with a story that brought the typical wand-waving, miniskirt-wearing junior high girl 20 Minutes into the Future by making her a regular girl in the real world and a magical girl online.

Fourteen-year-old Yui Kasuga is perky, creative, daydreamy... and at a complete disadvantage for someone that lives twenty years in the future: she's so computer-illiterate that she thinks "delete" is a snack food. Luckily for her, her best friend Haruna Kisaragi is a famous computer expert, taught by her father and her uncle. However, Haruna ain't stupid and Yui has to do her own homework, even though the rest of her friends are off to a virtual theme park. Yui puts the homework disk into her computer and manages to screw up so badly that a virtual creature hidden inside it is awakened by just the right key combination. Thinking he's stumbled upon a super-genius, the creature, IR, commands Yui to load her consciousness onto the "Com-Net" (internet) and become a virtual magical girl.

Yui immediately jumps at the chance to fight viruses and wear cute outfits (not to mention, one of the first people threatened by the Big Bad is her father), but as she finds out, there's more to the story than this. Eight sentient programs, of which IR is one, have been created by one Professor Inukai, who is comatose after another program named Grosser rebelled against him and overrode his car. Grosser is after these programs, which uphold the very existence of Com-Net (and, since Everything Is Online, the real world too); presumably, he wants to corrupt everything for some unknown goal. Yui is commissioned to gather all eight and combine their powers with her own to delete Grosser.

Yui might turn to cliche once in a while, but in other respects, it's very different. The title character actually wants to be a magical girl, and has dreamed about it and written like stories for a long time. She has a few basic powers with her Fairy Elemental Suit, but each Corrector Program can grant her a different Elemental Suit with different powers, varying the battle tactics. And though the plot might seem straightforward, never fear: Grosser and his Corruptor Programs aren't simple Card Carrying Villains, Inukai's not such a saint himself, the Correctors have their own personalities and quirks, and both Yui and Haruna might not be what they think they are either.

With Grosser's threat gone in the second season, the Correctors stumble upon a new threat in the form of a mysterious virus called Boggles that heavily corrupts anything that touches that's apparently connected to a virtual little girl wandering the net. As the chaos of this virus occurs, a mysterious human Corrector named Ai fends off the threat, having her own agenda to achieve...