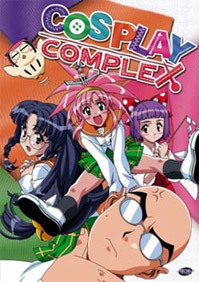 Let's together go to another world!
Advertisement:

Cosplay Complex (こすぷれCOMPLEX) is a 2002 OVA series, focusing on the hijinks of the East Oizumi Academy's cosplay club. The main character is Chako Hasegawa, a somewhat ditzy girl who absolutely adores cosplaying, despite the fact that she isn't very good at it.

The rest of the club is a weird bunch, even as total cosplay otakus go: there's Reika Aoshima, a silver haired control freak; Maria Imai, a Meganekko Miko, her adorable younger sister Athena Imai, and Jenny Matel, a blonde girl who lusts after Athena. The only guy in the club is Gorō Yorozuyo, who is prone to extreme bouts of method acting that would give Jack Nicholson a run for his money. Luckily for the club, he is actually pretty darn good at what he does.

The weirdest "members" though are Delmo, a pixie-like bunnygirl, and her friend Ikebukuro, an owl who can't speak but still somehow gets his messages across. Delmo has the magical ability of being able to change into all kinds of clothing, which saves Chako on more than one occasion, even though Delmo always has to be bribed with food.