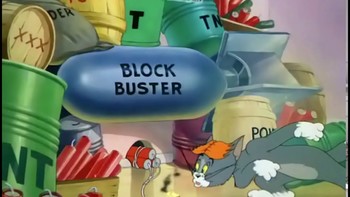 No sense in half-measures. And we do mean "no sense."

Mouse Trouble is a 1944 cartoon directed by William Hanna and Joseph Barbera, starring Tom and Jerry.

Tom has sent away for a how-to book. The cartoon opens with Tom delightfully receiving his book, "How to Catch a Mouse". Tom attempts to put the book's lessons into practice, but in typical Tom and Jerry style, each fails. When the book tells Tom to "Locate the mouse" he does so, only for Jerry to slam his nose in the book. When the book tells Tom to set a snare trap for Jerry, he does so, only for Jerry to use the snare trap on Tom instead. Finally, Tom gives up and tries a blunt solution with loads of dynamite, with an unfortunate outcome.