Western Animation / The Night Before Christmas (1941) 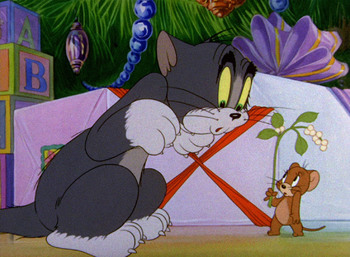 The Night Before Christmas is a 1941 animated short film (8 minutes) directed by William Hanna and Joseph Barbera.

It is a Tom and Jerry cartoon. It's Christmas Eve and Tom and Jerry are up to their usual antics. Jerry creeps out of his Mouse Hole and has fun for a while, bouncing around a teddy bear and goofing with a stuffed lion. But eventually he draws the attention of Tom, who chases him around for a while. Jerry winds up fleeing the house, exiting through the mail slot in the door—and then the cartoon takes a surprising turn.