Western Animation / Puss Gets the Boot 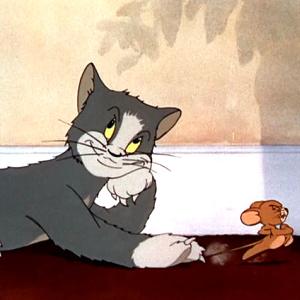 Tom and Jerry sure have changed over the years...
Puss Gets the Boot is an MGM Oneshot Cartoon, and is the first Tom and Jerry short. It was produced in 1939 and released to theaters on February 10, 1940 by Metro-Goldwyn-Mayer. It was produced by Rudolf Ising ( who had virtually nothing to do with the entire production) and directed by William Hanna and Joseph Barbera, their first collaboration in what would be a half-century long partnership, with musical supervision by Scott Bradley. The cartoon was animated by Carl Urbano, Tony Pabian, Jack Zander, Pete Burness and Bob Allen.
Advertisement:

The only screen credit on this film was "a Rudolf Ising Production." The short is notable for featuring the first appearances of the characters who would later be christened "Tom and Jerry" and would go on to appear in over 110 more short cartoons, seven of which won the Academy Award for Best Short Subject. As such, Puss Gets the Boot gave the animated duo their first Oscar nomination, though the short lost out to another Rudolf Ising MGM cartoon, The Milky Way. In the short, Tom's name is Jasper and Jerry is not given a namenote Bill Hanna gave an apocryphal statement that the mouse was named Jinx, but Joe Barbera claimed the mouse straight-up didnt have a name. Muddling things further is that MGM's press for the cartoon gave the mouse the name Pee-Wee. The plot set up the basic formula for Tom and Jerry cartoons for years to come, and as such, established many of the tropes commonly found in their shorts.

The short begins with the mouse, possibly named Pee-Wee but later known as Jerry, being tormented by Jasper, the cat later known as Tom (we'll refer to them by their finalized names from here on, for convenience's sake). Jerry struggles to stay alive, being chased by Tom until he unwittingly knocks over a houseplant, raising the ire of his owner. She delivers Tom an ultimatum; if he knocks down one more thing, she'll throw him out. Jerry uses this ultimatum to his advantage, and manages to turn the tables on Tom by threatening to knock fragile things over for the rest of the short, and of course, Hilarity Ensues.

This short contains examples of the following tropes: